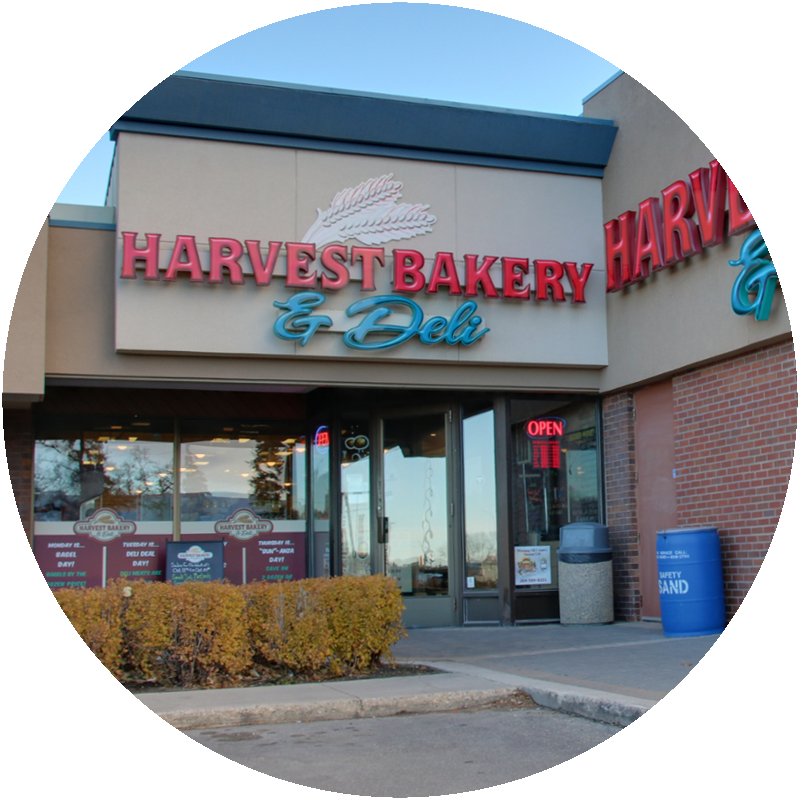 Harvest Bakery and Deli has been providing Winnipeggers with fresh baked buns, breads, and pastries for almost 40 years.

The business started off as a Bun Master Bakery franchise in 1980, and was purchased by Glenn Wilde in 1981. Glenn approached Bun Master in January of that year, but there was no franchise available in Winnipeg. While on vacation in Hawaii shortly after, he received a call to inform him that the Grant Avenue location had become available. Eager, he set up a meeting for as soon as his flight would land in Winnipeg, and handed over a cheque on the spot in the (old) Winnipeg Airport.

He immediately went to work. The store was ranked #95 out of 112 stores, and through Glenn’s efforts, within just three years it became #1. In 2001, the store became Harvest Bakery and Deli. Today, Glenn remains actively involved in the business, co-owning it with his son-in-law Andy Kostynuik. Glenn’s son Brent is also actively involved, overseeing all production in our 6,500 square foot manufacturing plant in River Heights.

Harvest Bakery has adapted to much change in the area over the years, and continues to provide Winnipeg with quality baked goods not just in our Retail Store, but also through our Commercial Sales Department to restaurants and other retail establishments throughout Winnipeg and Western Canada.

The bakery’s expansion has included the addition of a deli with catering services as well as made-to-order sandwiches, soups, and salads. Our bakery offers custom-made to order cakes and cookies, including photo cakes, while our retail store promotes made-in-Manitoba products to support local businesses in the same way as they’ve supported us over the years.

While their priority is producing high-quality bread and baked goods daily, Glenn and Andy are also committed to providing a healthy work environment and making their employees feel valued and appreciated. Their staff, in turn, provide excellent customer service so customers can also feel valued and appreciated. Glenn and Andy are proud to have been able to provide long-term employees with a stable livelihood. Although Harvest Bakery & Deli is a family-run business, some of our staff have been with us for more than a decade – even more than 30 years.

Glenn and Andy are appreciative of the support they have received over their many years in business, and believe strongly in giving back to the community and helping organizations with fundraising!